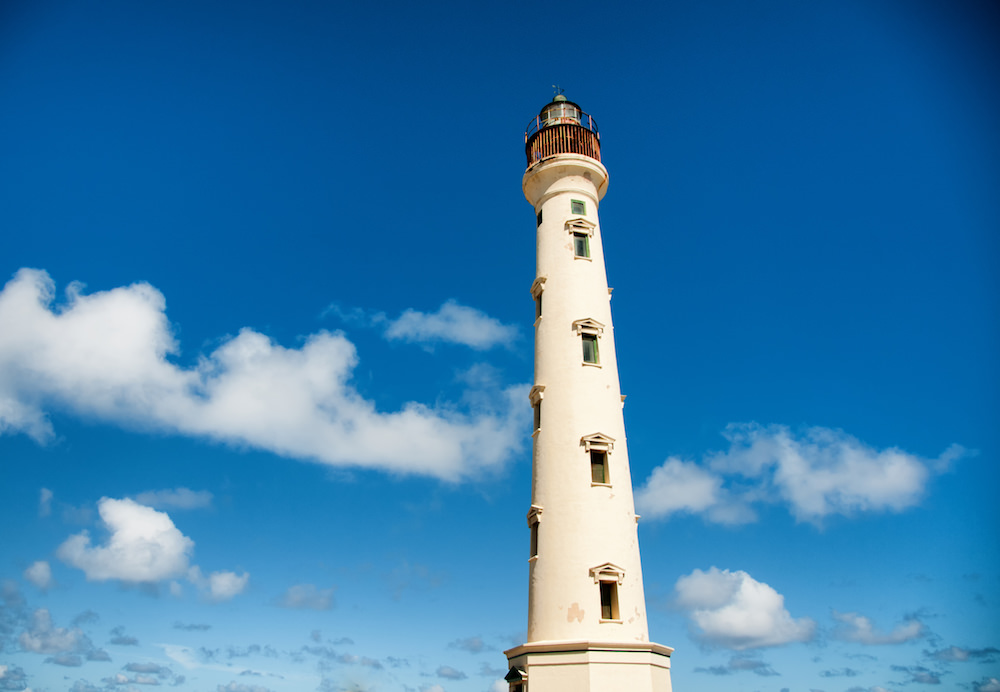 The California Lighthouse is located in northwest Aruba, about 0.6 miles southeast of the northern point of the island.

History of the California Lighthouse 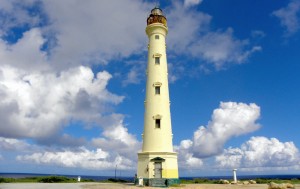 The lighthouse was designed by a French architect, and its construction began in 1914. It took two years to complete. It stands on an octagonal stone base with a lantern and double gallery and has a length of 98 feet. The metal top of the lighthouse has a diameter of 25 feet. The range of its lights is 50 Kilometers. The lighthouse was first lit in 1916 and is still active today functioning as a coastal warning light. The first lighthouse keeper was a young man from Curaçao named Jacob Jacobs. Jacobs had learned the profession of lighthouse keeper at another lighthouse on the small island of Klein Curaçao. The last person to watch over the California Lighthouse was Federico Fingal from Aruba. Today, the lighthouse is a monument that’s preserved by the governments of the Netherlands and Aruba in association with the Sun Development Company.

Video – The History of the Aruba California Lighthouse

The History of the Califonia lighthouse, Aruba from Rob Aris on Vimeo.

The California Lighthouse was named after the S.S. California, a British wooden steamship that wrecked on a dark night in the waters nearby in September 1891 while it was sailing from Liverpool to Central America. The vessel carried passengers, merchandise, provisions, clothes, and furniture. As the story goes, the cargo that the ship was carrying was thrown overboard, later to be sold in Oranjestad. Contrary to popular belief, the S.S. California is not the ship that received – but did not respond to – the Titanic’s S.O.S. signal. In fact, the vessel involved with the Titanic disaster, named Californian, was a 447 foot long (136 m), British steel-hulled Leyland Liner. The Californian was torpedoed by a German submarine in the Eastern Mediterranean during World War I, on November 9th, 1915.

Today, the S.S. California shipwreck is still a fascinating diving site. The wreck rises to about 30 feet – making it easy to photograph underwater – and is surrounded by coral formations and plenty of reef fish. The remains of the S.S. California are scattered about and covered in coral and sponges. The largest objects to be found are the ship’s engine and anchor. Strong currents make this site accessible to experienced divers only, however. If divers swim out past the wreck into deeper waters, many times, there’s a good chance of spotting some hammerhead or bull sharks. 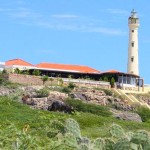 The 1-story lighthouse keeper’s house has been greatly expanded and rebuilt into an Italian restaurant named La Trattoria el Faro Blanco. The restaurant serves authentic Italian cuisine. Featuring 3 air-conditioned indoor dining rooms, an upper terrace offering beautiful views of nearby Arashi Beach and the Tierra Del Sol golf course, a lower terrace and a garden, La Trattoria is open daily at 8:30 AM. To avoid disappointment it might be a good idea booking a table in advance. Menu highlights to try are Crespelle Certosina: a Crepe filled with shrimp, mushrooms and Béarnaise sauce, Mixed Seafood Soup and Fettuccini Gamberoni Alla Vodka: a Fettuccini with jumbo shrimps covered with a sauce prepared with fresh tomatoes, basil, and a sip of vodka. From 9:00 AM La Trattoria also offers disposable cameras, film rolls, and Aruba California Lighthouse souvenirs.

Restoration of the California Lighthouse has Finally Finished!

After a period of almost one year, the California Lighthouse reopened its doors to the public on September 5th, 2016. As original construction started in 1914 and finished in 1916, restoration of the lighthouse was necessary because of wear and tear by the sun, water, and the wind. Frequent visits by tourists on their (guided) lighthouse tour also have contributed to the decision to restore the landmark. Since the lighthouse is a national monument, the restoration project was financed by “Stichting Monumentenfonds Aruba” (National Restoration Fund of Aruba), a financial institution specialized in the field of heritage conservation.