Choosing a flight to Aruba is easy and more affordable than ever, thanks to travel websites such as Expedia and others where incredible deals can be found, especially when you book your flight, hotel, and rental car in one go through your favorite travel website or app when you have decided on visiting Aruba, the One Happy Island with its one of a kind, beautiful beaches.

Airlines that Fly from the United States to Aruba

Airlines that fly from the U.S. to Aruba include American, Air Canada, Jet Blue, Delta, Spirit, United, US Airways, and Southwest. Most of these airlines operate several flights a day. On average, over 160 aircraft fly to Aruba on a weekly basis, with most flights coming from multiple cities in the USA, Canada, and countries such as The Netherlands, the United Kingdom, Brazil, Venezuela, Curaçao, and Bonaire. Domestic flights are mostly handled by Insel Air.

When to Buy Flights from the Unites States to Aruba

If you’re wondering what the best time is to buy an airline ticket from the United States to Aruba, use this when to Buy Flights tool

made by CheapAir, a company that has radically simplified the way people search for travel deals. They have compiled data on over 8,000 popular markets and analyzed over 1.3 billion airfares. Their search engine is truly unique. Just fill in your departure city and Aruba as your destination and just wait for the results to arrive. As a general rule, as you get close to departure time there will be fewer convenient Aruba flights available at or around the lowest fare.

Finding cheap flights to Aruba is not an easy task. Therefore, as a service, we’ve made some examples with the CheapAir Tool, to show you how ticket prices change throughout the year and how prices are depending on what city you’re flying from. The results may surprise you.

The chart below shows when to buy flight tickets for New York to Aruba. It shows an average of the lowest airfares over the past year. The Prime Booking Window, illustrated in green, clearly indicates that the best time to buy tickets is between 205 and 320 days in advance. In the data used, the lowest price for a roundtrip to Aruba was $446, the highest was $662. That’s a difference of over 48%. Serious money!

Example 2 – When to Buy Flight Tickets from Chicago to Aruba

Using the same When to Buy Flights tool

, you can see that finding the cheapest time to fly from Chicago to Aruba is quite a different story. Here, the green Prime Booking Window indicates that the best time to buy tickets is between 29 and 103 days in advance. In the weeks and months before that period, prices are quite stable. In the data used, the lowest price paid for a ticket to Aruba was $513, the highest was $641. A difference of nearly 25%.

Example 3 – Cheapest Time to Fly from Miami to Aruba

Using the same tool once more, yet another fascinating story becomes visible when it comes to finding the cheapest time to fly from Miami to Aruba. It’s almost as if the first chart (New York to Aruba) was reversed. The aforementioned general rule of thumb is violated: it actually pays to book a flight from Miami to Aruba as late as possible (but not too late!). The green Prime Booking Window shows that the best time to buy tickets was between 5 and 46 days in advance. In the data used, the lowest fare was $390, the highest was $441. A difference of 13%. Not a huge shocker but hey, that’s still 51 bucks.

Flying to Aruba will take some time. To get an idea of how long your flight to Aruba will be, have a look at some of the examples below. Flight times are based on an average flying speed of 500 miles per hour and they include 30 minutes for take-off and landing.

Aruba’s major and only airport is Queen (Reina) Beatrix International Airport, named after Princess Beatrix of the Netherlands. It has one runway operating in two directions. Queen (Reina) Beatrix International Airport is a modern and passenger friendly one and it offers Tax-Free shopping, several restaurants, and bars, banks, and lounges with free wifi. Car rental services are available very close by. Public transportation (Arubus) is well taken care of, and it’s possible to get a taxi or rent a car at the airport making it easy for you to reach your accommodation in Aruba when you are visiting. Uber or other ride-sharing services on the Caribbean island are not available though. Traveling by (government-regulated) taxi is very easy, especially in the tourist-areas or hotel-zones.

Flying to Aruba – US Bound Passengers Going Back 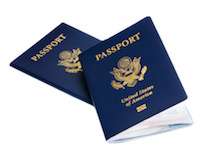 As more than half of the tourists that travel to Aruba every year are from the US, Queen (Reina) Beatrix International Airport has a building solely built for handling US-bound passengers. This building includes more than 40 ticket counters and airline offices. Thanks to these facilities, US passengers flying back home after their trip to Aruba will be cleared into the United States.